I rode another metric century!

Steve and I did the 62 mile route in the Evanston Bike’s North Shore Century.

It was a fun ride and well run … although there were a few gripes (that I won’t go into).  There are a few take aways for me in relation to the Tour de Cure. 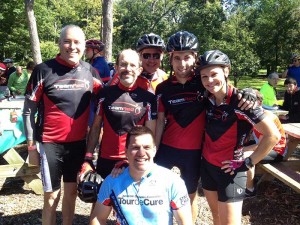 I rode with friends from the Tour de Cure.  Steve, Eric, Vince, and I started out the 62 route around 8:30 (a bit later than planned), about halfway through we hooked up with Laura & Dan.  We also ran into Bill, Chuck, Bernadette, and Matt along the way.

Oddly enough … my time on this ride was almost EXACTLY the same as my previous metric century.  Four hours, 59 minutes.

I would love to be able to do a full century, but I think that would require a lot more training and some more metric centuries during the year.