Have you ever had frost build up in the ice dispenser chute on your General Electric side by side refrigerator?

I did … and it took me a bit of time to figure out what the problem was.

At first I thought it was a bad seal on the door of the freezer. But the seal was actually fine and, if it had been bad, the frost would have been on more than just the ice dispenser chute. 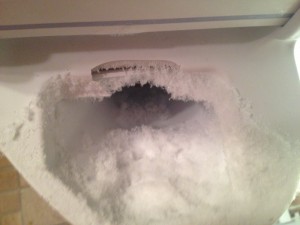 After a bit of research I determined that it was the flapper that covered the chute when the dispenser wasn’t dispensing ice.