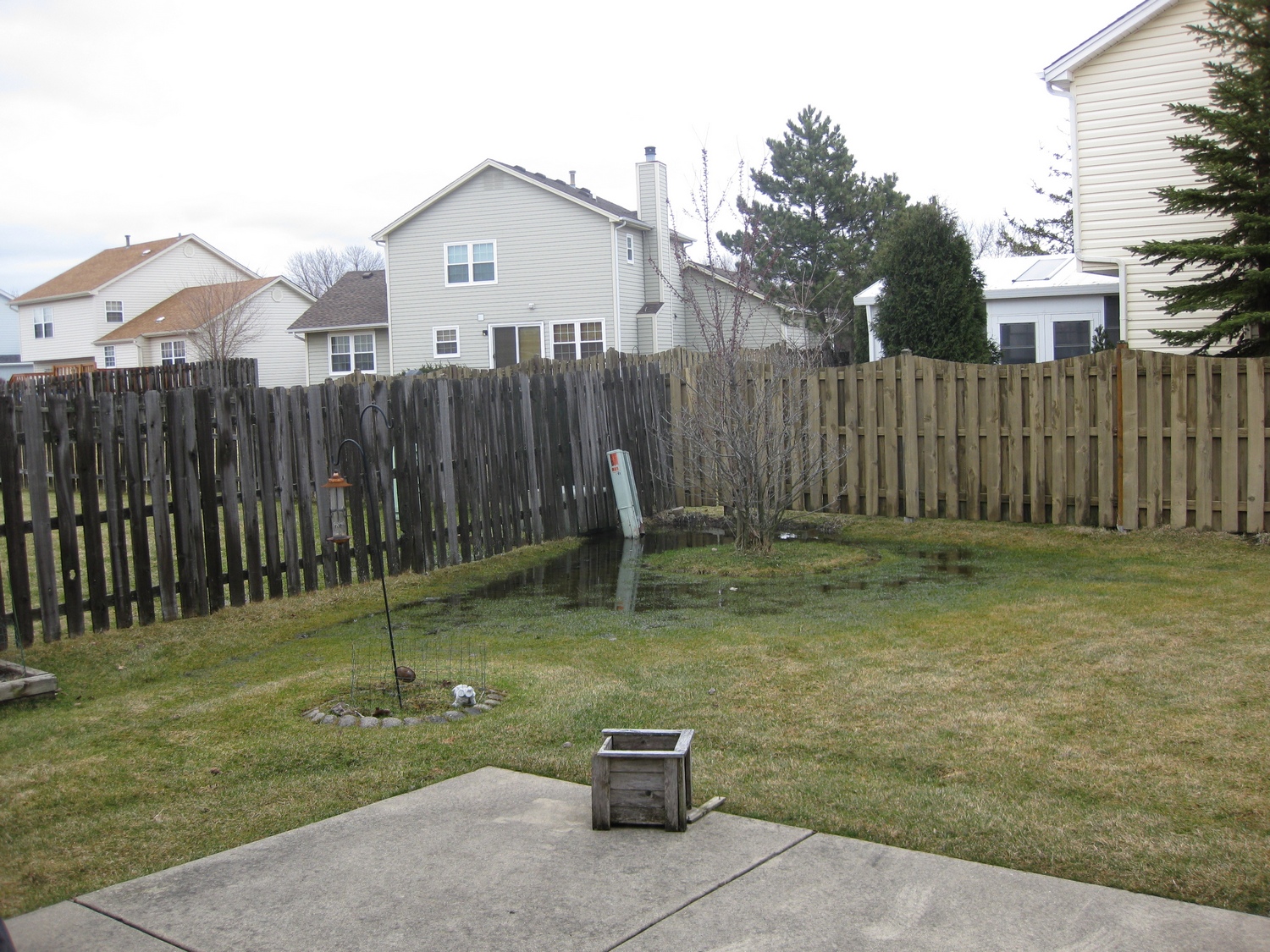 For many years we’ve had a serious drainage problem in our back yard …. every time it rained, we would get a big puddle in the back yard that would stick around for at least a week.  The picture to the left is the back yard 3 or 4 days after a heavy rain.

At one point, Ginny was thinking about having a rain garden put in the back corner, but I wasn’t a big fan of that idea.  We ended up dropping the idea because it would have taken a fair amount of maintenance.

In addition, our sump pump outlet was really close to the house and was not at all protected from freezing.  More than once the sump pump pipe would freeze in the winter, after we had a thaw, and the pump would get close to burning out because it couldn’t pump water.  Luckily I’ve always been home when this has happened … so I was able to remove the frozen section of PVC pipe and have it just dump out on to the lawn.

(If you haven’t noticed, we’ve had our fair share of water related house problems)

For years I kept saying I was going to get these two problems resolved.  Well, I finally got off my butt and had it taken care of.

END_OF_DOCUMENT_TOKEN_TO_BE_REPLACED

As I mentioned a few days ago in twitter, the outflow pipe of our sump pump froze.

I had gone down stairs to get something from the utility room and found that the sump pump was running … and didn’t stop.   The pump sounded OK, but no water was draining from the pit.   I turned the power to the pump off and triggered the backup pump … which ran but didn’t remove any water.     This meant that the pumps themselves weren’t the problem.   I went outside and discovered that the outflow pipe was frozen solid.   Clearly not a good situation.

END_OF_DOCUMENT_TOKEN_TO_BE_REPLACED

Had lunch at a local cyber cafÃ© I had a chicken roti pretty tasty. Kind of like a West Indian burrito.

Aragorn Studios is a art collective place lots of different artists, some working on stuff, and some just selling.

My only big gripe is that all the vendors had a 5% surcharge for credit cards. I ended up paying cash.

Leaving, we tried to find the airport Avis location with no luck. Kind of odd, I know that Hertz, National, and Thrifty had booths in the lobby of the airport building.

On the way home we decided to make our own dinner, so we stopped at the Rite Way again and picked up stuff for pasta & garlic bread.

Before dinner I took my laptop out to check mail & stuff. I managed to catch Riley on the webcam as he sitting on the table. I tried to get his attention by changing the way the lights blinked on the cam. Changing a setting might have caused a slight click, as he turned his head quickly when I did. Not entirely sure though. He looks normal though, so that’s a good thing.