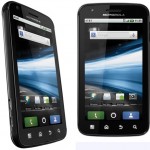 Android … to be specific.

I decided it was time to upgrade my phone … and switched to an Android based phone.  I got a Motorola ATRIX.

I was split between the ATRIX and the HTC Inspire … the Inspire has better battery life and a bigger screen, but the ATRIX has expandable memory and a front facing camera.

The primary reason for switching was so I could do mobile app development … I’ve got a few ideas for apps in my head and didn’t want to invest in a Mac just so I could develop them.  Android apps are developed in Java and the SDK is free (and Eclipse based).

It’s going to take a bit of time to get used to the new user interface … but so far I’m liking it a lot.

It’s certainly going to take some getting used to … it’s very different than the iPhone.  It does have some really nice features though …

I did have some problems getting the mail application setup … but that’s another post.

I only have a few gripes about the phone …

The phone initially had Android 2.2 installed (Froyo) … but the over the air update worked like a champ and it’s currently running 2.3 (Gingerbread).

Speaking of which … before you ask … I’ve already promised my iPhone to my Dad.  He’s grumbling a bit about having to get a data package, but he’ll get the minimum.  I think he’ll be fine as long as he doesn’t stream any video.  When the next iPhone comes out, Ginny will probably be getting that … and her old iPhone is already ear marked for my Mom.

There will probably be a fair number of posts on the topic of Android in the future … especially since I’m currently in the process of installing the SDK and Eclipse plug-in.  Watch this space.