OK, first and foremost, this isn’t going to be an in-depth, expert, evaluation of road cycling on Maui … it’s just my impressions and opinions.  If you want something more, I suggest you take a look at Tom Meloy’s very nice writeup from a few years ago.

On a recent vacation to Maui, I decided to rent a bike and try some cycling.  I did, and here’s what I found…

There are only a few bike shops on the island.  I checked out three.

West Maui Cycles, located in Lahaina, was where I rented my bike from.  This decision was based primarily on the relative location to where Ginny and I were staying.

The shop was well stocked and the staff friendly & helpful.  I rented a Specialized Sirus Sport (very similar to my Sirus Elite) and I wasn’t disappointed.

I would have preferred to rent a road bike, but the only road bikes they had were carbon framed, higher end, bikes that cost significantly more than I wanted to pay.  I talked to one of the staff (possibly the owner) about why they didn’t have aluminum road bikes available, and was told that they used to have the Specialized Allez for rent, but nobody wanted them.  Everyone wanted to try a fancy carbon frame road bike when on vacation.

They suggested that I bring my own pedals (and I did) which they attached quickly.  They did not check the bike for fit … but it wasn’t necessary, it fit fine right out of the gate.

They used to run group rides on Wednesdays … but the person who lead the rides no longer worked at the shop, so they don’t do that anymore.  They did try to hook me up with a group that was riding around the west part of the island … but I wasn’t able to hook up with them (I overslept and missed the meet up).  In retrospect, it was probably wise … as a subsequent drive around the island reminded me of how hilly the roads are.

On a driving trip to Paia, I checked out the Maui Cyclery.

This shop was a bit smaller, but the staff were friendly enough.

They do lead group rides … but they aren’t free.  A escorted ride (I assume with SAG support), bike, water bottle, food, jersey, etc, cost $140.  Bringing your own bike (local, transported, or rented) knocks $40 off that.

I thought about trying their ride out, but I Ginny would have had to drive me to the shop and pick me up.  That, and the expense, didn’t justify it.

I also considered at South Maui Bicycles, located in Keihie, because I was told that they DO lead group rides (for free). I liked this until I saw their web page which says “everyone welcome if you can keep up”.  To me this indicates that their rides are not “No-Drop” and they set a pretty aggressive pace.  The other issue with this shop was the relative location to where we were staying.  Since I had a bike, but no bike rack (I could have rented one if I really wanted), it would have been hard to get to the shop for a start.

There are other bike shops, most seem to be located in Kahului, but I didn’t check them out.

There appears to be one that used to exist, but the web site is now a GoDaddy parking page.

There is a mountain bike club that has a Facebook presence … and the person who runs that page tried to hook me up with a road riding group, but nothing came of it.

There isn’t even a cycling meetup group. 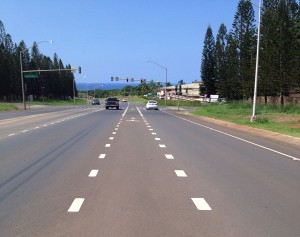 On west Maui, the Honoapiilani highway (RT 30) has a very wide shoulder and is marked as a bike route. There are even bike lanes at some intersections.  At least one tunnel I rode through has a button that lets cyclists activate a flashing light to tell drivers that a bike is present.

That said, after Honolua Bay, the bike route ends and the road becomes (again, IMO) terrible for cyclists.  No shoulder to speak of and very steep hills. I’m not fan of even driving some portions of it. While Ginny and I were driving the road we did see some serious cyclists making their way and moving at a good clip.

The local roads are a mixed bag … some have a shoulder to ride on, others don’t.  Sometimes the same road transitions from having a shoulder to not having one and back to having one.  It depends on the neighborhood it’s going through. Many of the local roads are in pretty poor repair, and not easy to cycle on.  You also have to watch for the grooving in the street near storm drains.  If you don’t see those you are in for a very jarring series of bumps.

Riders that I encountered were not in the habit of calling out “on your left” when they passed … and pedestrians I passed seemed startled when I did it. Some people did appreciate it and thanked me as I went by.

Drivers didn’t seem to mind that I rode on the side of the road.

There are three major environmental factors related to cycling on Maui…

Before I jump into this section, I have to tell you, this will have been the first time I rode outside (for any distance) since October of last year.

My first ride was pretty aggressive … this was just after I picked up the Sirus Sport from the bike shop.

I rode from Lahaina to Ma’allea and back to the condo (about 7 miles beyond the bike shop).  A total of 38 miles.

I rode along Honoapiilani Highway and had some pretty serious hills to climb.  Some with a 5% grade.  Add to that the relative lack of shade, so it got pretty darn hot.

The next two rides were a bit more tame, 9.5 miles and 10 miles. Both were relatively easier, but by no means easy.  There were some serious hills to climb and (on the return) descend.  Descending one hill got me going more than 30mph.  That kind of freaked me out and I slowed down.

The remaining rides were shorter … just to get out and ride.  I rode 10.2 miles, 15.8 miles, and the final ride was only 6.7 miles to return the bike to the bike shop.

Along the road I encountered a few other cyclists … mostly on road bikes, but a few on hybrids like me.  Those that I stopped to chat with were friendly and willing to share information with a kindred spirit.

Sadly, even though I wore the jersey, nobody called out “Go Red Rider”.  🙁

In total, I rode 120 miles over the two weeks we were there.  I could have gotten a bit more in, but it was rainy the first few days we were there, and I didn’t want to pick up the bike too early and have it just sit around.

Next time we come to Maui, I will definitely rent a bike again … probably a road bike instead of the hybrid.  Hopefully I’ll be traveling with other cyclists, as I always prefer to ride with a group than by myself.  Even more so when I’m riding unfamiliar roads.