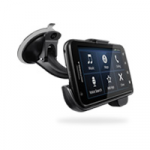 A while ago I wrote about my iPhone Complaint … where all the accessories I was looking at were designed to fit the iPhone itself and not when it was in a case.

I was expecting to the have the same complaint about my new Motorola ATRIX … but, so far, it looks like I won’t.

I purchased a the Car Dock accessory for the ATRIX and was expecting to have to remove the phone from it’s case whenever I wanted to put it into the dock.

The phone fits fine in the car dock with the case on … in fact, this seems to be the normal situation … and Motorolla includes an adapter for people who don’t have a case on their phone.

The only minor hitch was that I had to carve a small notch in the case so the clip that holds the phone in place could correctly clamp down.  A few minutes with my dremel tool fixed that.

Of course it won’t work for a big case … like an Otterbox.

Even the standard desktop dock I purchased could accommodate the phone in a case … but I had to call Motorola and request the appropriate insert for the dock.  The insert it came with would only work with the phone not in a case.  Oddly enough, a number of documents on the Internet indicate the desktop dock shipped with two inserts … but mine only came with one (this is, apparently, the norm).  The part number I had to request was SJYN0722A.